My schedule for October this year is really tight. Mostly work related tasks that require lots and lots of time and perhaps even staying at hotels to be on time on the next places. Additionally I’ll have one week of school/training with exams at the end that I don’t want to fail and will have to study a bit in the evening. Not to forget I’ll also be away a few weekends for music making… and and and…
All that together sadly makes it impossible for me to participate in this years #inktober challenge. MAYBE I’ll draw one or two pictures now and then.. but not like during the last two years where I successfully finished the 31 days. This sadly won’t work this year. I’m really unhappy, yet I cannot change it.

Life got pretty busy lately and I am no longer able to do all the things I initially plan to do. inktober is one of them, as are various internet sites I have in the pipeline that are standing still.
My private task-list right now shows 256 open tasks, many already overdue.

One task I however could do and will continue, mainly because I doesn’t really require any time investment. As in the last post mentioned, I was “working” on loosing weight. At the beginning of July I was close to 100kg/220lbs and by mid August I wanted to be back in the “normal” BMI zone. That I managed to do! I am really happy and am feeling a lot better myself, a lot fitter and actually am okay looking into the mirror again XD
Right now I’m already getting close to 80kg/176lbs and closer to my second goal, being around the 22.5 BMI mark. This still requires roughly 7kg /15lbs but I have lots more time for that than I had for the first goal.

The time limit for the first goal had two reasons:
Firstly because the last weight record I found in my weight tracking app was from the 23th of August 2016 an did read 83.6kg. So I wanted to be back below that by the same date in 2018.
Secondly I was in Dortmund, Germany on the 25th of August for the FINAL FANTASY XIV ORCHESTRA CONCERT 2018 –Eorzean Symphony- and I wanted to look good with suit and tie. Hey it was a classical concert and you have to dress the part I thought!
And yea both reasons pushed me to get my weight down and I did do it and got a nice picture with the composer, the director and the main vocalist. 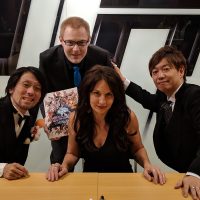 So yea, next goal does not really have a date, but hopefully I’ll reach it soon. Then the third long term goal will be to keep the weight! There are many more events next year I want to attend and I want to look to par there as well.

In February I’m planning to head to Paris for the FINAL FANTASY XIV FAN FESTIVAL 2018-2019 and in April I have a big drumming event where I want to look good in my drumming uniform. I’ll write more about these events later when they are getting closer ;3

SOOOO yea busy life, but it’s better to be busy than not knowing what to do!